…but they are also conducive to productivity. Just sayin’.

It’s been an interesting couple of weeks since moving into the new apartment. No, the moving isn’t finished yet; still quite a bit to go. The key, I suppose, is that everything’s functional, albeit still in flux. Add to the mix the fact that the new academic semester is just getting underway, and there’s quite a bit that’s still up in the air. So finding a rhythm is still a bit of a pipe dream.

So, what have I been up to? Aside from ongoing research and marathon training, I recently journeyed to the nearby Phipps Conservatory to check out this fella: 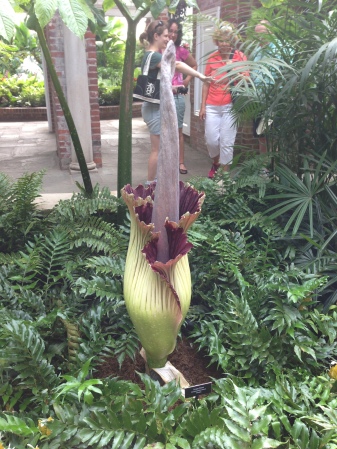 It’s a corpse plant, duly named because of the rancid smell it emits when it blooms. Which, by the way, doesn’t happen for at least a year or two. These things bloom for 24-48 hours at most, then curl back up for years at a time. So it was pretty neat to see in action; plus, the smell had mostly "died" off (though of course a Phipps employee had a container of the same chemicals for us to whiff…holy crap it smells awful).

We also just returned from our annual departmental retreat. Each year, the faculty and graduate students in the joint program journey to Hidden Valley Resort for roughly 24 hours of listening to talks, eating food, listening to more talks, socializing, competing, and oh yes: drinking.

This year I gave a talk on the odor research I’ve been conducting as part of my overall thesis. I think it went fairly well; either that, or I did a really poor job of explaining things in the 8 minutes I had, since I received way more questions afterwards than probably all the other student presenters combined.

One of the students in my year launched an ambitious experiment: creating four teams ahead of time to compete in a series of organized events. Typically, there’s a game of soccer, perhaps some Capture the Flag, and any other games that folks want to bring along. But this year, we had several events pitting volunteers from each team against each other: cornhole, bocci ball, basketball, card games, egg toss, a road race, and even a pedal boat race.

The winning team will be announced this Wednesday. I think ours had a pretty good shot of winning, coming in either 1st or 2nd in every one of the events I participated in (cornhole, tichu) or directly observed (road race, pedal boats, bocci).

This coming weekend will be an interesting one: three of the greatest friends a guy could ask for are coming to Pittsburgh to throw my bachelor party! And since it’s Labor Day weekend, this is going to be a bachelor weekend. The Lady is going to be on the west coast visiting her best college buddy who she, due to sheer distance, hasn’t seen since graduating. So the brand spankin’ new apartment will play host to a groom-to-be and his three groomsmen for the holiday weekend.

Yes, insert jokes about strip clubs here. Honestly, what I’m most excited about is seeing these guys, catching up, and playing some board games and video games. We will be attending the Pirates / Cardinals baseball game that weekend (which will be intense: they’re basically tied for 1st in their division), and we’ll be doing some river rafting and kayaking. But it’s the company that’s most important to me, and that’s what I’m most excited about. Like The Lady and her friend, I hardly get to see these guys anymore (one lives in St. Louis, the other two in Atlanta), so anytime I get to see them, it’s awesome for that reason alone.

I’ll wrap this up with one last thought: I just wrote this entire entry using the IPython Notebook (and nbconvert to put it in HTML format, obvs). It’s not as user-friendly for general blog posts as the native WordPress interface (obviously), but for posts that use a lot of code snippets, this will be pretty freaking awesome. I’ve been using IPython for a few years as a way to stub out code and run some sanity checks, but between its Notebook and Parallel computing, I’m thinking of expanding my own repertoire with it. I probably won’t use it much to post here (probably more often at my research blog), but it’s pretty neat to do at least once 🙂

This is my favorite guinea pig picture ever.